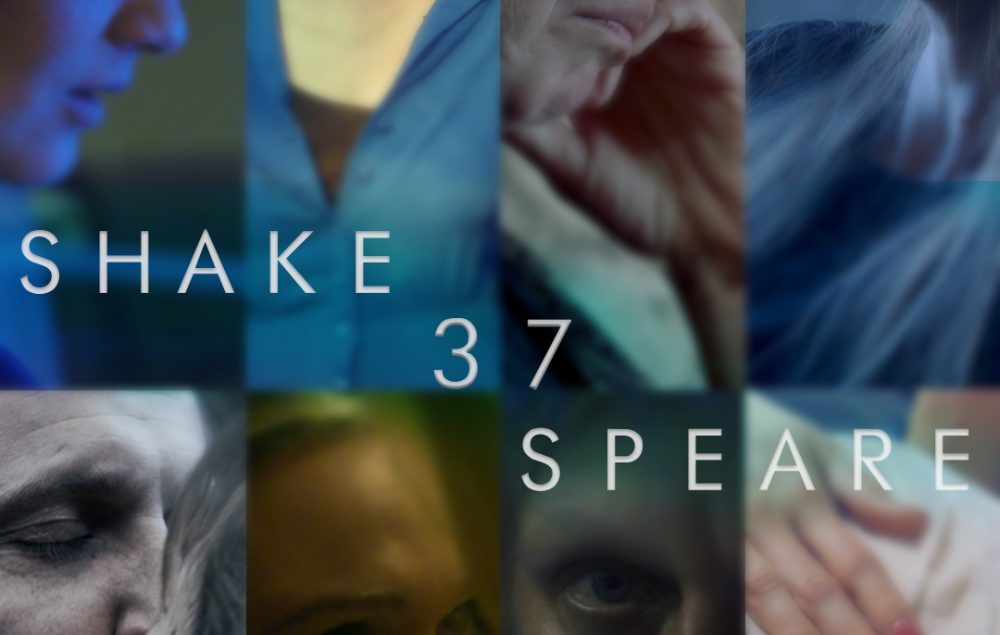 TRIP/Webszínház is a company focusing on theatre, contemporary dance/circus performances and concerts – and stream performances during lockdown…

Shakespeare/37 (‘a new normal for theatre: swapping the stage for the screen’) as Trip’s response to lockdown…

37 playwrights adapting 37 of Shakespeare’s most iconic scenes to bring drama to our digital screens — April 2021 saw the release of excerpts from Romeo and Juliet, Measure for Measure and King Lear, heralding a new series of short films bringing a fresh perspective to some of the playwright’s most recognisable moments of drama.

The first three episodes premiered in April 2021 as part of the Budapest Spring Festival and were watched free of charge for 24 hours on YouTube, after which the series was made available at www.webszinhaz.com in Hungarian with English subtitles.

Shakespeare/37 is a novel approach to his plays that interprets specific scenes from across all of his works while bringing these creative reenvisionings into an online space.

Inspired by the Dogme-movement, and aimed at embracing the traditional values of story, acting and thematic interpretation, Shakespeare/37 is the combined efforts of director László Magács and 37 Hungarian drama and prose writers and poets, each of whom has written their own retelling of the master playwright’s greatest scenes.

These 20-minute shorts aren’t direct reenactments of Shakespeare but instead focus on each chosen scene’s central theme or conflict. The shorts are based on the essence of the original plays and poetry in the same way as Tom Stoppard’s Rosencrantz and Guildenstern Are Dead  — part of the inspiration behind Shakespeare/37 — where the playwright leveraged two minor characters from Hamlet for a new twist on Shakespeare’s classic.

In this sense, each of the shorts within the Shakespeare/37 series focuses on a particular character or key scene in the midst of a moral dilemma. These are stories that are familiar to most of us, examining changes in the human state of mind as well as how characters deal with the consequences of their actions.

Like so many industries over the last year of 2020-2021, theatre has had to face unprecedented challenges, but this is something that Magacs has managed to overcome by going ‘back to basics’. Shakespeare/37 handles its approach in the same way that the classic Greek plays adopted: one location, short duration, unified plot.

Each of the shorts are therefore set in a single location taken from a wide range of unique spaces, from industrial buildings and reservoirs to heritage sites otherwise inaccessible to the public. They are all filmed in one take, too, with just one shot and no cuts leading to an intimate and intense style to the shorts that helps to bring that same emotional impact that can come from seeing a play live at the theatre. The emphasis is on the honest, raw emotions of the actors, in much the same way that actors of ancient civilisations were expected to perform without gimmickry or stage tricks.

In response to the restrictions placed on establishments such as theatres and cinemas as a result of the pandemic, Magács saw releasing them all online as the response to finding the best format for the Shakespeare/37 project. Having directed nearly 100 plays throughout his career, he sees this as an opportunity to reach out to audiences of dedicated theatregoers that typically do not enjoy online equivalents.

“People are embracing films in their home more than ever before, while theatres need more time to adapt to the new normal,” says Magács. “Very few theatre enthusiasts enjoy the online experience of staged and recorded plays. The theatre experience needs a new artistic form without compromise, and the new format lies in filmmaking.

“This is why I have directed the series as uncut scenes using state-of-the-art film technology. It offers the viewer the opportunity to delve into the intimate moments of acting, see how actors experience one another.”

Magács has a long track record of working with Shakespeare, and is a familiar face at international festivals. He is currently the head of the cultural production space, TRIP, where his previous project to bring theatre to a lockdown audience, entitled Quarantine Theatre, reached millions of people from across 48 countries and was featured in the New York Times.

The individual episodes of the shorts are mixed in their styles and genres, with some episodes closer to theatre or film in their presentation while others take the inventive forms of music videos, poetic narratives and more. But these are not the only twists on the original texts presented in Shakespeare/37. The first episode begins at the end of Romeo and Juliet, for example, and touches on the importance of parental responsibility. Here an art nouveau-neo-byzantine tomb chapel that was built for Hungary’s most famous champagne manufacturer has been used as the location – it is usually closed to the public.

Similar approaches have been taken with the other tales explored by Shakespeare/37. Measure for Measure takes the original work and places it into an office environment, while King Lear is set in a contemporary urban space that inspires the visual style and setting of the episode entitled The Plush – envisioning the drama as a conflict between three sisters in a canteen kitchen.

On top of the efforts of the director, the efforts to ensure that this eclectic mix of tones, styles and settings are kept consistent and familiar is thanks to the work of cinematographer Nora Natalia Mesiter, a member of the young revolutionary generation of the University of Theatre and Film Arts (SZFE) in Budapest.